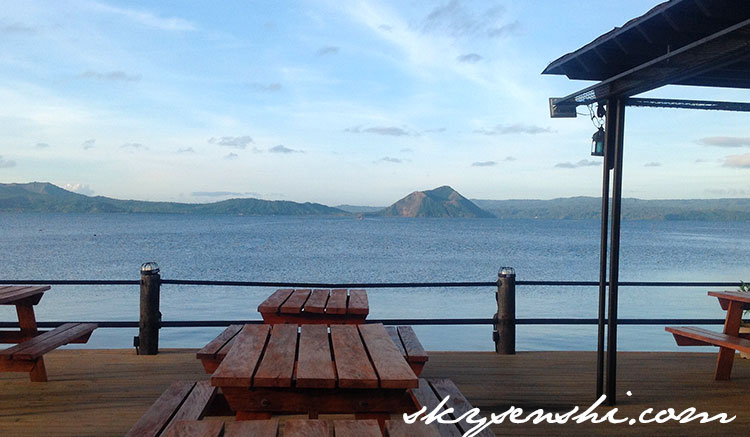 I was always a home body. I didn’t like going out. I didn’t enjoy traveling that much. When I was a kid and a teenager, my mom had to drag us through several countries — with me being half asleep as my body had never acclimated to the time zones. US trips, especially as an adult, will result in me spending an entire day in bed whenever I return home.

That sort of changed when I hit 40. I don’t know what happened, but suddenly, I was always itching to get out of Metro Manila. Many of my 2017 weekends were spent away from this city (lol, I owe blog posts but you’ll see my Google Maps account being completely active). I only had one international trip in 2017 (I don’t think I’ll ever get over hating our immigration process), and husband spent three months working in Japan, but most of the time we were together, we were in the South Calabarzon area.

Anyway, hubby and I decided to spend my 41st birthday weekend at Club Balai Isabel in Talisay, Batangas. This was our room.

I don’t know whether I should be happy or sad, but the facilities are so complete, we were sad that this was not our condo. That kitchen was to die for. It’s tiny, but I want that so much, I could cry. It has so many compartments, and even has a cabinet with a dish rack. You can’t use these, though, as indicated in the house rules.

I don’t mind not having dental kits or blow dryers, but I am always on the lookout for coffee making facilities. They had double what we expected (4 bottles of water), which was how we remained hydrated throughout the hot trip. Oh yeah, if you forgot to buy extra toiletries and water, there is a convenience store right outside the compound.

As you can see in the next few photos, the room they gave us comes with a balcony that offers a great view of the lake. By the way, Balai Isabel is situated right smack where the lake is so if you go down to the shore, you’ll be surprised to see Taal volcano up close. Like its entire body, not just that point that looks like a volcano.

It was 3PM when we arrived, and I was looking forward to touring the compound (basically walking so much to increase my Fitbit step count, haha). Unfortunately, we had to wait until almost 5PM for the sun to be a little bit less cruel.

The entire place looks like a smaller version of an upscale subdivision (the type I usually see in the Alabang/Las Piñas area). I like that the houses followed a theme without looking identical, and I have a thing for local-looking settings (it had similar decor to The Legend Villas, where we got married, except Balai is tons prettier).

Walking around the space reminded me of childhood. Husband and I live in the city now, renting a small condo in the middle of a noisy neighborhood. Both sets of parents raised us in single-detached homes surrounded by lush greenery and paths you can jog in without any threat of being run over by cars. So the walk was a relaxing semi-trip down memory lane. And ooh, they have cats. One of them sat down with me during dinner.

It was a shame I am injured, because I noticed that there are many activities you can do for a price, and most of them involved the lake water.  Am not interested in the Aqua Park, though. Being an over-sized inflated structure, it looks so off, even if people seem to enjoy being around it. As you can see, it totally ruined my view of Taal volcano’s tip.

In any case, that thing is optional, so I chose to ignore it, hahaha! Didn’t diminish my Balai Isabel experience one bit.

What I wanted to see most was the Spousal of Mary and Joseph, which is the chapel inside the compound. I was not disappointed. Except maybe for the new altar. I kinda liked the old one that I saw in pre-2017 photos. That was simpler and classier. Too many churches these days seem to overdo the gold gilded look.

Last we explored was the dining area. When you enter the Terraza Restaurant, you’ll find another beach front at the back of it. It actually has the best view. Not sure if it was because there were too many people at the other beach near the chapel or because it is far away from the eyesore that is Aqua Park.

Because we were bound to have breakfast at the Terraza in the morning, we opted to eat at Isabel’s Panaderia & Pizzeria for dinner.

Pizza was ok, but filling. And two of them are still cheaper than eating at CBTL, surprisingly. It was too warm where we sat, but I don’t want to complain because that was also where the best lighting was. I don’t like eating in dark places. They result in bad food photos *coughLasCasasFilipinascough*.

We had breakfast buffet at the Terraza. There weren’t many choices, as opposed to Shangri-La’s Circle or Sofitel’s Spiral, but they were adequate. I only went back three times, and there were even stuff I didn’t get to try because I got full.

Club Balai Isabel is our best couple’s quick weekend vacation ever. (Well, we’ve only been married 11 months so that’s not much, haha.) We really like being able to walk around a hotel’s compound in relative privacy, enjoying nature and seeing new exotic animals roam freely, something that we rarely enjoyed during our 2017 trips. Husband complained that an overnight stay was not enough, so we’ll definitely come back for a longer stay.

Thing is, I owe you guys reviews of the previous out-of-town places we’ve been in. They are now going to pale in comparison (except maybe for Cintai Corito’s Garden, but I went there for work, and Las Casas Filipinas). 🙁

Do take note that we’re a simple couple, who are easy to please. We don’t expect 5-star service from a hotel that is 4-star at best. 🙂