A few weeks ago, I received two emails inviting me to Dulaang UP’s Shock Value. When I saw that  Mylene Dizon and John Lapus were in the list of cast members, I immediately accepted the invitation. Since I was told that I could bring two more guests, I brought my sister and her colleague Aliza along. We had picked the September 18, 10AM show because I figured that if I were to promote the play, I should opt for the earliest play date possible.

Well, I didn’t see John Lapus or Mylene Dizon — I think they were playing on the alternate schedules — but Jomari Jose and Ana Abad Santos, their alternates respectively, were really funny, too. I had an ultimate favorite character, but I’ll talk about him later.

This is a test shot. Aliza sat right beside me, while my sis sat to her left. Before going in, I asked the promoters if I could bring my camera. I was allowed as long as I didn’t use flash. That’s the thing, I really do not like using internal flash.  Good thing the play was a little over two hours long. That meant I had enough time to play with the ISO, shutter speed, exposure levels etc.

Yet another test shot. This was when I found out that Shin-Chan2, despite being on “Force Flash Off” mode, emits this red light before taking in shots. I tried covering it with my finger but the red light passes through my finger as if it were transparent. I then used Shin-Chan2’s black Case Logic, which worked in sealing off any remaining light.

Here’s a snippet of the synopsis from the email that publicity manager Amella Bersalona sent me:

Matt Desaparecidos is a man at the top of his career at WOPTV as a host and producer of the hit program “Shock Value”. But one sexual indiscretion with a young sex worker, Jason, is captured on tape by Wes Gachalian, a reporter of the rival station, KOTV. 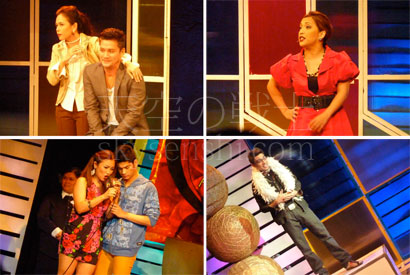 Thus starts Matt’s downward spiral. As he maneuvers to save himself, we meet people whose lives he has affected: Rina, his boss and supervising producer, Dita Manalac-Guevarra, a newscaster, Richie Castro, a slick junior producer, and Jelo Pasiuatan, a talent handler and pro. 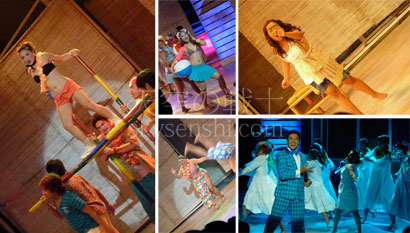 We also meet the talents whom Matt has developed: Krista, a fading teen star, Elbert, the current favorite and little Tweety Girl, a child star with her father Papa Dan, Raquela Roxas, a washed-out sexpot, and Kuya Mike Montero, an icon of showbiz. Through their conversations, we witness how Matt has so gracefully manipulated their lives and their careers… 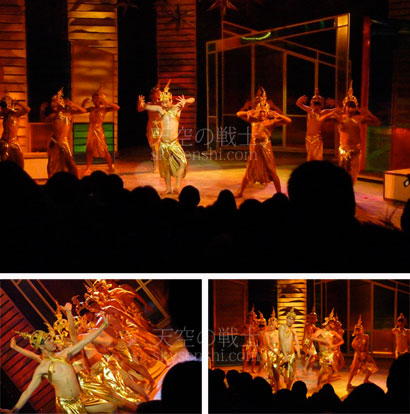 This is one of my favorite parts in the play, I swear. I love it when the cast breaks into a song and dance number during scene transitions because they all perform so well! Especially Elbert, the popular teen star that Matt successfully built up despite his grammatical flaws.

All in all, a great presentation. (It’s actually a parody of how we Mass Comm people can be brutal when it comes to covering stories. Love it!) I totally enjoyed my time here. Even without the invitation and the free seats, I would gladly fork over P250 for such exemplary display of talents and artistry. I really should watch out for more of Dulaang UP’s projects.