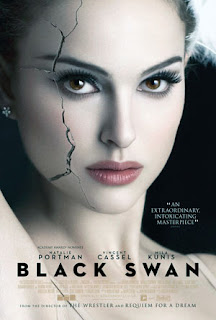 Many of us who love Tchaikovsky’s  Swan Lake know of how the beautiful princess Odette is turned into a swan by an evil sorcerer’s spell. To break the spell, Odette needs true love, which she does find in the form of a handsome prince. But the sorcerer and his daughter, Odile, trick the prince into believing that Odile is Odette and Odile successfully seduces him. Heartbroken, Odette finds freedom in death. (Of course, the animated Swan Lake I saw as a kid gave me a happy ending so…)

revolves around the story of Swan Lake, the ballet. Sweet Nina (Natalie Portman

) compete for the position of the ballerina who plays both Odette the White Swan and Odile the Black Swan. While Nina can channel the White Swan perfectly, the ballet’s director, Thomas (Vincent Cassel

), thinks she lacks the passion to dance the Black Swan’s uninhibited routines. As Nina prepares for the daunting role, she ultimately loses herself and lets the Black Swan take over….

Has anyone here ever seen the movie Grave of the Fireflies

(火垂るの墓)? A lot of people who’ve seen it agree that it was a very beautiful anime, but they can’t bear to watch it again. I said the exact same thing about Black Swan. This isn’t a tearjerker, though. This is pain in its purest form. I went into the cinema being all bubblegum genki and went out of there with a heavy chest, accompanied by labored breathing and the desire to run a stake through my heart. If you have been feeling depressed, please do not even attempt to watch this.

(Or as my fellow RPGamer Lia would say: “See a feel-good movie afterward.” I turned to The Wallflower

for my much needed laughs.)

‘s work is a poetic masterpiece, as he made strategic use of visual metaphor to capture the struggling emotions of a tragically disturbed ballerina. Portman’s and Kunis’ acting were just as powerful as the visuals. The emotions they evoked are so raw in their dualities that they just hurt so damn much…

I have nothing but praises for this thought-provoking film.

I just don’t want to see it again.